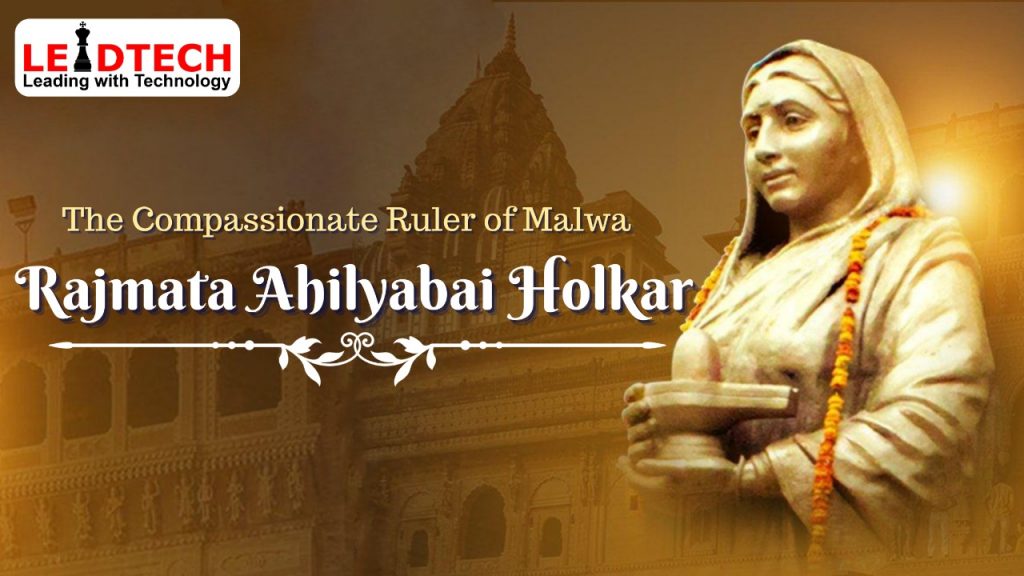 Rajmata Ahilyabai Holkar was a strong woman and the queen of the Kingdom of Malwa in Indore. She is considered as one of the best warrior queens in Indian history. Her magnificent and glorious rule ended with her demise on 13th August,1795. Remembering her greatness, the Republic of India issued a commemorative stamp on 25 August 1996.

Ahilyabai was considered as a very good administrator and the city of Indore witnessed historic rise during her reign. From a tiny village to a flourishing city, Indore prospered during her 30-year rule. She was famous for having built numerous forts and roads in Malwa.

She employed forest tribes to be the protectors of travelling merchants, a job for which they were paid handsomely provided it was performed well. She spent heavily on projects such as the construction of roads, wells, Dharamshala (resthouses) and temples. She even contributed to projects outside her dominion, particularly the restoration of ancient Hindu shrines that had been destroyed by Islamic invaders.

Two famous examples were the Vishnupad Mandir in Gaya and the Somnath Mandir in Gujarat.

Historians had written greatly on how she encouraged all within her realm and her kingdom to do their best. During her reign, the merchants produced their most elegant clothes and trade flourished to no end. No more was the farmer a mere victim of oppression but a self-sufficient man in his own right.

“Far and wide the roads were planted with shady trees, and wells were made, and rest-houses for travellers. The poor, the homeless, the orphaned were all helped according to their needs. The Bhils, who had long been the torment of all caravans, were routed from their mountain fastnesses and persuaded to settle down as honest farmers. Hindu and Musalman alike revered the famous Queen and prayed for her long life,” writes Annie Besant.

On her death anniversary, Leadtech fondly remembers the brave warrior queen for her glorious work for India and its people.