The political structure of Assam in India is headed by the ceremonial post of the Governor. He is assisted by a council of ministers, headed by the Chief Minister, who are members of the Assam Assembly. In recent years the Governor has become more powerful, especially because the last two Governors have been ex-Army generals and the Army is entrusted with anti-insurgency operations against ULFA and other armed groups.

The Assam legislative structure is unicameral and consists of the 126-member Assam Assembly. Members are elected for a period of 5 years. The Assam Assembly is presided over by the Speaker, who is generally a member of the ruling party. 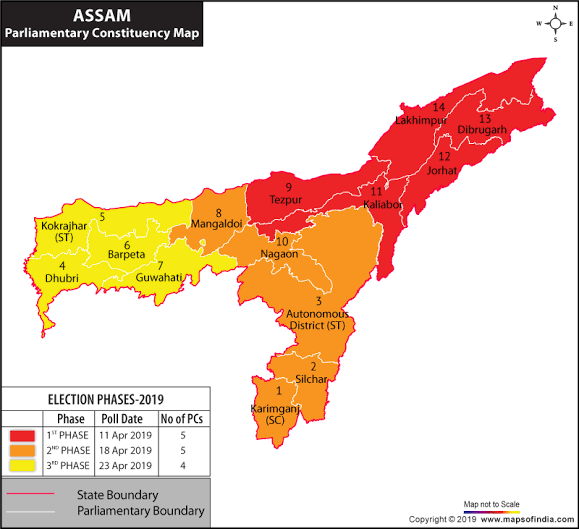 The main occupation in Assam: –

Agriculture is the main occupation of the people in Assam. It accounts for 69 percent of the state’s workforce. The farmers engaged in the cultivation of rice, which is the staple diet of Assamese people. Other agricultural crops include pulses, jute, tea, and fruit cultivation. Assam is well known for its tea plantation all over the world and the tea gardens of Assam provide employment to nearly a million people. Assam’s tea plantation forms 15 percent of the world’s tea output.

The major revenue of the people in Assam is due to the forests. Timber and bamboo are the prime products from the forests of Assam and the production of these involves many people. Besides cultivation, weaving is another major occupation in Assam. Assamese women practice weaving as an occupation. The state is known for the production of silk material, tussar, and other fabrics. The industries of wood products and food also provide occupation to many.

Which party is ruling Assam : –

The governor heads the political structure of Assam in India, who is assisted by a council of ministers, headed by the chief minister, who are members of the Assam assembly. However, because ex-army generals were the last two governors, it has become more powerful. Assam sends it’s 14 members to the parliament of Lok sabha. 2016 election brought a change of power as Congress which was the ruling party since 2001 lost its power in 2016. Current incumbent Sarbananda Sonowal became the Assam’s first chief minister from the Bharatiya Janata Party when he was sworn-in on 24 May 2016.

The unprecedented mandate in favor of the Bharatiya Janata Party (BJP) in the 2016 Assembly elections in Assam necessitates a careful understanding of the growth and consolidation of the party in the state. The BJP’s rise in the state can be understood in the backdrop of a favorable social base which has perceivably shifted from Congress in recent years.

What were the main issues faced by the people of Assam?

Immigration from Bangladesh has always been a center stage in Assam. The debate over immigration has been rolling for decades. Assamese-origin people blame this community of taking their jobs and land and of altering the state’s culture by causing demographic change.

People of Assam believed that their culture is being harmed by the intruders from Bangladesh. The people see them as a threat to their culture. And with them, they brought some major social problems such as: –

Promises made by the party in power: –

Mainly Bangladeshis people were seeking shelter in Assam. However, BJP promised to speed up the construction of the boundary between Bangladesh and Assam and also to expel the intruders.

With the stopping of illegal migrants, many other social problems of Assam will be solved Because illegal immigration has been creating too many issues in this state.

It also promised to provide employment as with the level of unemployment going down other things like poverty, domestic violence, Robbery will automatically take back seat.

Current issues in front of the state government of Assam: –

Protest erupts in Assam over the passage of the citizenship amendment bill. However, NRC is a national problem but Assam was the first to be affected by it.

Protesters in Assam oppose the grant of Indian citizenship to any refugee or immigrant, regardless of their religion, because they fear it would alter the region’s demographic balance. The real reason why the Assamese are against this bill is that– the proposed bill violates the historic Assam accord of 1985, it also goes against Assam’s social and cultural fabric.

According to data, the state has about 942 unemployed medical graduates, 7,804 jobless engineering graduates, 16,576 postgraduates, 3,17,8 24 general graduates, approximately 6,82,796 HS-passed candidates, 16,121 ITI certificate holders who are unemployed which clearly is the biggest cause to be worried.

Another issue is the lack of infrastructure and poor quality of education. However, the government is taking initiatives but it doesn’t seem to match the expectations of the people.

Hoping the party would take the issues seriously and take steps to solve these measures, and also be more outspoken about it to the public.

The economy of Assam: –

Comparison between the impact of social media and print media: –

One of the ways that social media has transformed the politics of Assam is the sheer speed at which news, poll results, and rumors are shared. Whereas in the pre-internet days, people had to wait for the next newspaper or TV news show to get the latest information, online news is a 24/7 phenomenon.

Social media has taken this a step further. We get all of the latest trending news stories and opinions shared by your friends whenever we log on sites as a literacy rate are also higher in Assam most people are socially active on social media.

Political polls are an important part of every campaign. They are often confusing because you can often find multiple polls with contradictory results posted on the very same day.

This is true even if they are flawed. A poll can be a self-fulfilling prophecy. For example, if people think one candidate is far ahead in the race, they might conclude there’s no point in voting for the underdog. When people are posting the latest poll results on social media throughout the day, there’s a great deal of pressure on candidates to pull ahead of their opponents.

Targeting was used throughout the advertising industry to make sure that ads and messages reach the right audience. Candidate of Assam does this as well. In the age of social media, politicians, and people running for office are able to target their campaigns. If a candidate wants to address the concerns of women, college students, retired people, Latinos, or any other group of voters, they can now tailor their messages. Just as advertisers on Facebook are able to use analytics and targeted advertising, so can candidates and politicians.

The print media has a role to inform the citizens about the competing political parties and their programs and candidates, and to contribute to the formation of the opinion of the electorate.

The overall aim of print media coverage during elections campaigns in democracies is fair and objective reporting and information dissemination.

They achieve measures such as a just allocation of broadcasting time between all the competing parties and candidates, (voluntary) agreements on fair news programs, reports, and non-news programs, or debates between party leaders.

It is crucial in the first instance to ensure that every party and/or independent candidate has access to the print media, in particular radio or television, since most voters gain their knowledge about politics via the print media.