The outbreak of Covid-19 has posed a serious threat to the Nation with varied impacts from region to region but politics has always been its epicenter. Ongoing Pandemic and its mismanagement has deep- rooted consequences among the scheduled castes and scheduled tribes, women and other vulnerable sections of the society that has raised the issue of social justice. All political parties are gearing up for the upcoming Uttar Pradesh Assembly election 2022. A common phenomenon that run through in all political parties’ manifesto is “social Justice”. BSP claims to be a party of Bahujan and champion of social justice but recent developments within the party are indicating that all is not well.

Recently many prominent leaders have left the BSP party and joined either SP or BJP and they made allegations of her bureaucratic style of working, monopolization, unapproachable, arrogance, and not upholding the legacy of Kanshiram Ji. As these leaders said “kab kisko hata diya jaaye kya pata”. For instance, MLA Aslam Rashid, in an interview, mentioned that 11 BSP MLA trying to form their own party and would seek support from others as well. In the past R. K Chaudhary, Indrajeet Saroj, Naseemuddin Siddiquie, Swami Prasad Maurya and Brijesh Pathak etc. have left the BSP party. 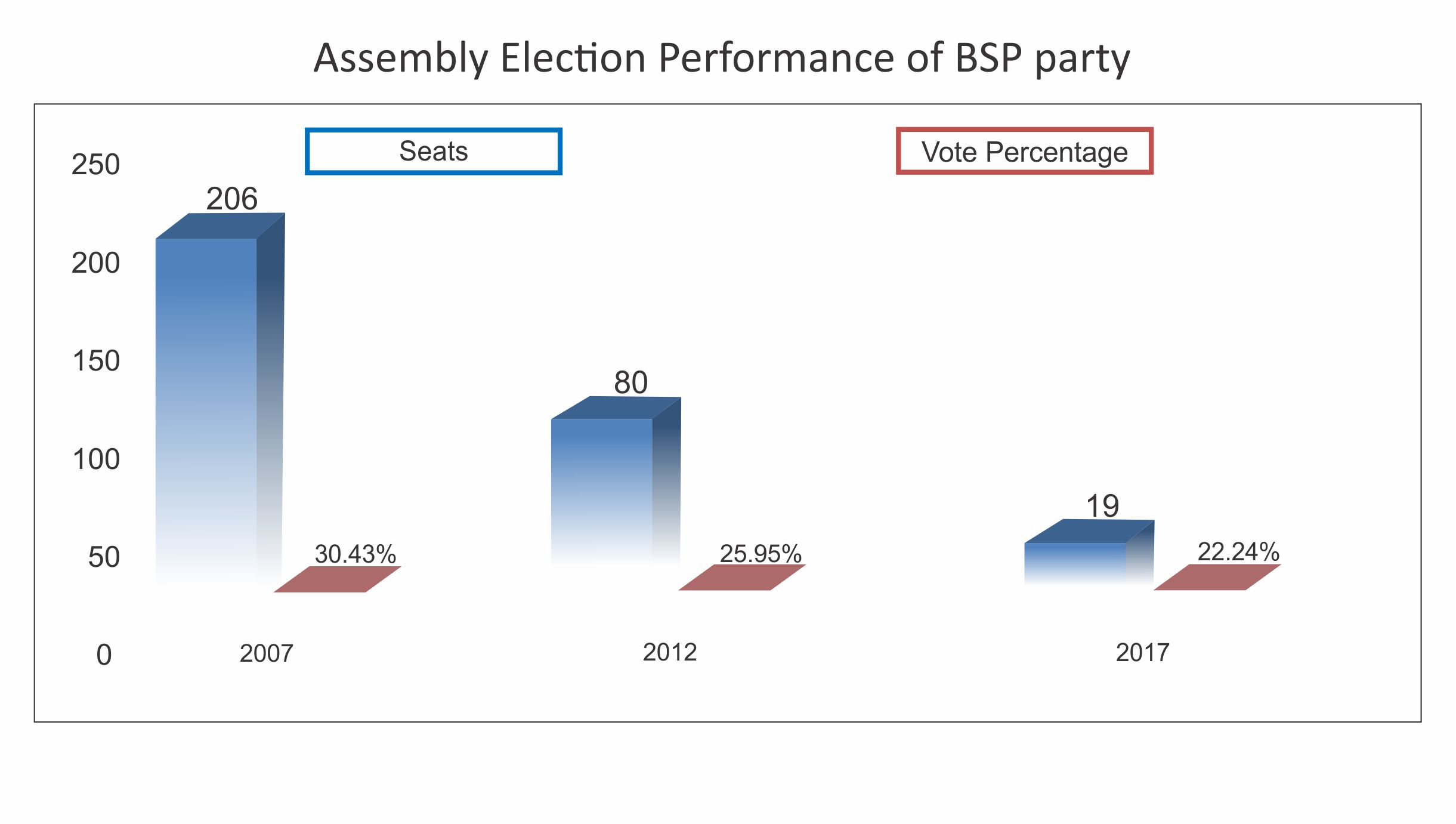 The above graph shows the trend of constant decline in the voting percentage of the BSP party but still, the BSP has managed to secure 20% of votes in all consecutive assembly elections. Overall the BSP’s performance has improved but each constituency-wise it has lost its ground considerably. The rise of young Dalits icon Chandra Shekhar Azad and his connectivity with common masses (predominantly Dalit youths), using all means of communication, raising the issue of social justice, and visiting places where atrocities against Dalits being reported and so on have made him a key player in upcoming U.P state assembly election 2022. 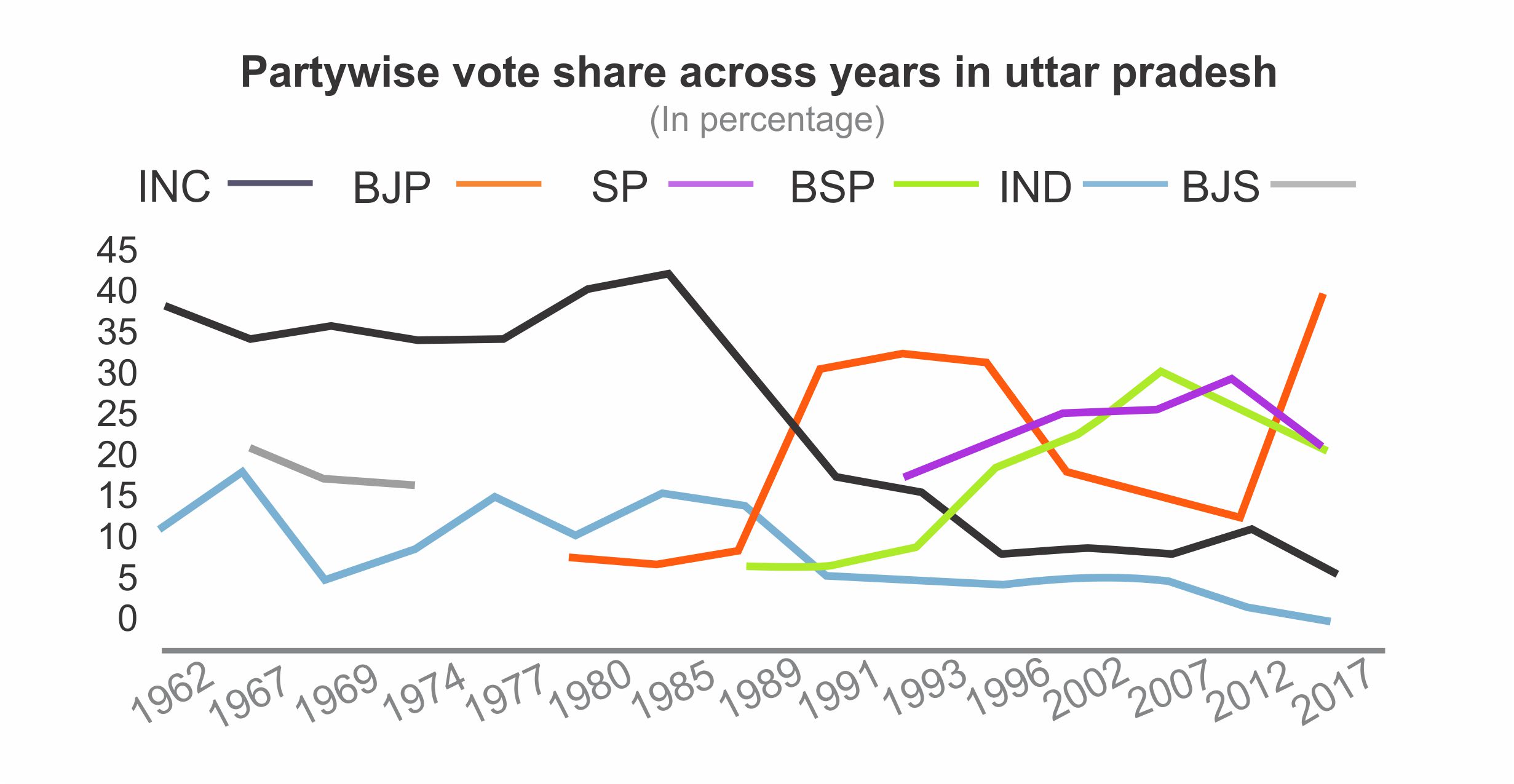 As above-trend shows that the BJP party has been successfully transferred SC and OBC votes  considerably due to its social engineering strategy, by capturing the political vacuum created by other political parties, making alliances with small regional parties giving them tickets and portfolios, and also targeting Dalits and MBC i.e. most backward castes such as Mallah, Bind, Rajbhar, Chauhan, Kumhar, Luhar, etc.

The vision of Kanshi ram was to put forward the idea of identity-based representational space for the communities in the Indian Political system and absolute equality, opposed to dynastic control over the party and opportunistic politics. Sadly Mayawati did it all that being avoided by the Kanshi Ram and consequently, BSP has lost the elections and also reducing vote bank particularly among the Balmikis who were traditionally associated with BSP but now shifting to BJP considerably. Therefore BSP requires immediate self-introspection, building good teams of youths, the delegation of power, decentralization, and democratization in the working of party, building trust among the party workers, and gain the faith of common voters.