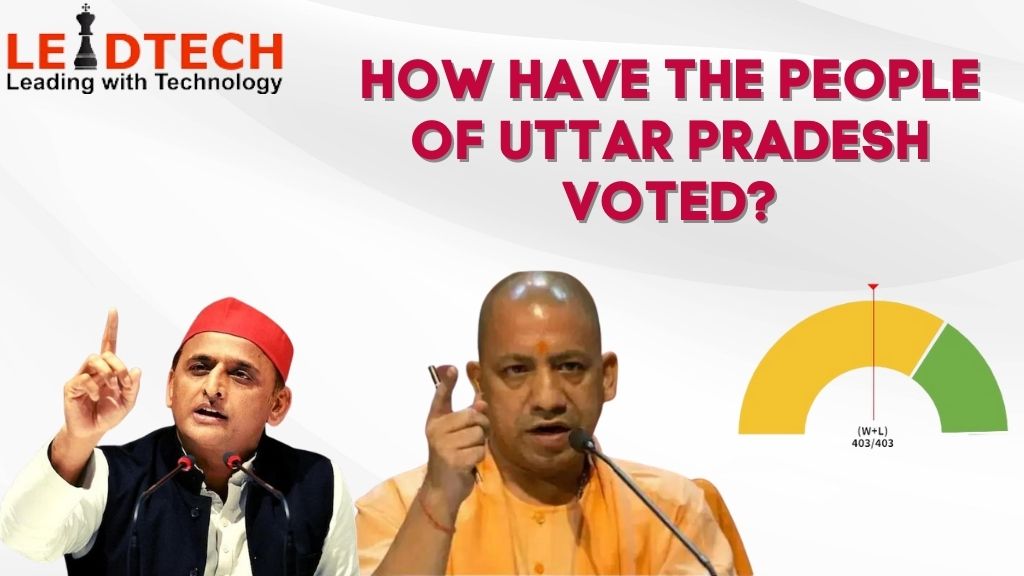 A state in northern India, Uttar Pradesh has always been a significant political state of the country. After the heated stir in Punjab Congress, it will be interesting to watch political leaders’ new marketing tactics in UP Elections, 2022. The major parties contesting in UP elections in 2022 include Bhartiya Janata  Party (BJP), the Samajwadi Party (SP), the Bahujan Samaj Party (BSP), and the Congress.

The panchayat elections were seen as a semi-final for the assembly elections as they provided an idea about the ground situation. SP says its supported candidates performed extremely well as people don’t like the current government.

But, the BJP claims it has won more seats than it did in the year 2015. The polls didn’t get contested on party symbols, but candidates represented a political party.

While the BJP chief minister Yogi Adityanath will project his achievements, the opposition will highlight his shortcomings. They are likely to target the UP government on the mishandled COVID-19, and the BJP is expected to counter the massive decrease in such cases recently.

With the COVID-19 deterioration in the year, all eyes are glued towards the 2022 assembly polls. It’ll be interesting to watch how the ruling party will handle the negative impact because of the ongoing farmer’s protest against the Center’s new agricultural reforms.

While the BJP is sure that it will win more seats than in 2017, the voters tend to disagree because of incompetence during COVID-19.

Will COVID-19 Have an Influence On Assembly Poll Results?

BJP said it can’t get blamed because of the natural phenomenon which prevailed worldwide. However, the opposition states that people didn’t die because of COVID but because the government mismanaged the situation.

The voters of UP have been seen voting for alliances, caste, and religion. So, it’ll be an interesting thing to watch whether people get influenced by COVID-19 or not.

Are all the Parties Prepared for UP Elections 2022?

What Do the Experts Have to Say?

The experts believe that the BJP government’s image got a bit dented because of the COVID-19 situation. And they also believe that Akhilesh Yadav has the upper hand as people still haven’t forgotten the development work done on his part.

Because of the previous development, Akhilesh has still considered a tough competition for the BJP. His image is strong, and he can certainly be fierce competition in the UP Elections, 2022.

The first UP Assembly election was held in 1951-52, where Congress captured 388 seats.

Past Scenarios about UP Elections

Even after having the push from Congress, CM Akhilesh Yadav failed to win seats. The powerful political campaign led by the BJP caused hurdles, and ultimately Akhilesh’s cycle got punctured. BJP saw a massive rise in the votes since 2012 and came into power.

2012: UP Gets its Youngest CM- Akhilesh Yadav

Mayawati went to the 2012 UP Elections after completing her tenure as the CM, and she became the first CM to complete her full term. But, UP’s voters weren’t impressed by her and voted her out in the election.

Samajwadi Party came into the picture, and Akhilesh Yadav became the youngest CM of UP. However, he faced quite a backlash but was able to withstand the storm.

The Uttar Pradesh Assembly election of 2007 was a track breaker election as Mayawati won the elections. She became the first CM to complete her tenure. But, she was voted out by the citizens in 2012.

VP Singh’s Janata Dal came out as the single largest party in 1989. The government was formed with help from BJP, and Mulayam Singh Yadav (a minister in the Janata government) became the Chief Minister.

A not long time passed when Mandal and Ayodhya took center stage in UP’s politics in elections. The OBC, Dalits, and Muslims were deemed as en-bloc voting communities.

Dalit and OBC got formed in 1993 as BSP’s Mayawati and SP’s Mulayam Singh Yadav came together. The tie-up wasn’t long-lasting. In 1995, Mayawati joined hands with BJP and became the first Dalit Chief Minister of Uttar Pradesh.

Years from 1989 to 2007 were unstable were 10 Chief Ministers got a witness and three President’s Rule. Jagdambika Pal only lasted for 48 hours as the CM of UP.

Assembly elections were held in 1980 where Congress got 309 out of 425 seats. The Raja of Manda, Vishwanath Pratap Singh, became the Chief Minister. However, Congress didn’t stop its practice and continued replacing the Chief Ministers.

These eight years were full of ups and downs, and Uttar Pradesh saw at least six CMs before VP Singh revolted.

Elections were held in 1980 for the Lok Sabha, where Indira Gandhi came into power, and she got the power to dissolve the Janata Party government in the states.

A fresh election was held in 1969. The Congress didn’t make it to the majority by 2 seats. Congress won 211 out of the 425- seat Assembly. Jana Sangh got 49 seats, and Charan Singh’s BKD remained victorious on 98 seats.

In the next 8 years, Uttar Pradesh got to see four sessions of President’s Rule and six Chief Ministers, which included Charan Singh. Charan Singh remained in the office for over nine months.

The Chief Minister’s Office saw its first change in Uttar Pradesh, where Congress couldn’t win a majority for the first time.

An alliance was formed between Bharatiya Kranti Dal of Jat Leader Charan Singh, Praja Socialist Party, Jana Sangh, CPI(M), Swatantra Party, and the Republican Party of India. A total of 22 Independent MLAs provided support to the alliance. It was here when Charan Singh got on the chair of Chief Minister.

The government of Charan Singh didn’t even rule for one year, and the Assembly got dissolved only after one year of the President’s Rule.

UP got 5 Chief ministers in the period from 1952 to 1967. Govind Ballabh Pant became the first CM. After this, Sampuranand became the next CM. The Congress didn’t stop changing its Chief Ministers.

Now, moving forward to more details about the UP Elections which are going to be held in 2022.

Uttar Pradesh has provided nine prime ministers to India. Most of the experts have predicted an easy win for BJP in the UP Elections, 2022. It is said that the party is expected to win 259 to 267 seats which will be followed by the SP party. Congress was the center of India before the 2014 general elections. Congress suffered a major shock after the 2014 elections.

Most parties have already formed alliances, and SP and Congress might forge associations with smaller parties to increase their chances to win more constituencies. However, the Mayawati party has been told to go alone and form no associations with other parties so far.

Experts consider that a planned association between SP and Congress can be fruitful for both parties. However, they advise a formal alliance. But, SP has shown its disinterest to align with Congress as the former has only 7 MLAs present in the state. However, people who are searching for an alternative to the BJP are considered to choose Congress or SP.

Many people are looking forward to the approaching UP Elections, 2022. Surveys are being conducted to see the people’s interest. The 2022 elections are considered the turning point for the AAP. People are seeing AAP as a great alternative in Congress-led states after its downfall in Punjab.