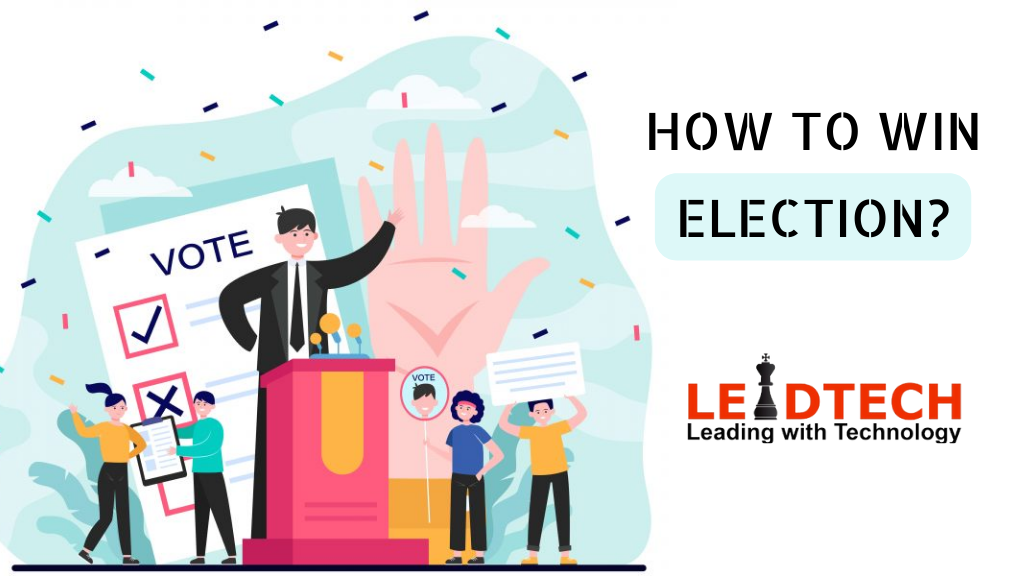 Do you know the right answer to how to win election? Read Through the Article and get the right guidance here! There is no second place in an election, so either you win or you lose, and nobody plays to lose. While elections are a complex affair with a number of moving parts but that is nothing to be afraid of, all one needs to do is work smartly and efficiently and win the confidence of the voters, it is that simple and that hard to win an election.

The juggernaut of an undertaking that is the elections in India is an activity that is unmatched in mobilization or enthusiasm. People from all walks of life and stations find themselves at the centre of these elaborate campaigns which seem to be partners in their aspirations and fears. This is a testament to how elaborate an election campaign must be and with an evolved and informed electorate tomfoolery is no longer the way to go, a candidate must not only be able to reach their electorate but also be in touch with what they expect and in doing so be able to resonate with those expectations to win an election.

So the basis of winning an election is to have a data-driven and pragmatic election campaign that is extensive enough to cover the relevant issue while staying on the message but dynamic enough to adapt as the situation unfolds. To do so one needs to research, analyze, and formulate a plan that can be all these things.

Steps to Make You Understand – How to Win Election?

Researching the constituency, the voters, the opponents, and the candidate allows for the collection of data that can be analyzed to find the right messaging for the campaign giving the answer to who to reach, how to reach when to reach allowing for maximum dispersal and penetration of the message which will resonate the most with the people.

This has led to a structural change in the way election campaigns are designed and executed, political campaigns have become more and more data-driven and dynamic with re-calibrations based on this research in real-time to ensure maximum efficacy. Analysis both of the candidate and the demographic of the electorate is of paramount importance to find insights to create the campaign.

This is prepared by supplementing conventional political tactics and methods with modern technology and tools. Using surveys, publicly available data, historic analysis, and consumer data, using data analytics to profile the electorate incredible ways and then utilizing the inferences from that data to supplement the on-ground activity. There is no running away from the fact that a digital presence is not just important but the need of the hour in the race of how to prepare for election.

Voter segmentation by preparing a detailed voter profile is a very important step. This allows to gauge the perceived support, the real support, opponents’ chances, undecided votes and develop a profile on the likes, dislikes, fears, aspirations, wants, and needs of the voter, and one can mould the message to work in that fashion. This also allows for finding influential community leaders who play a major role in influencing voter patterns.

This allows for creating tailor-made campaigns and getting feedback accurately which allows for creating a campaign and also gives you a clear idea about how to win election. This means that targeted campaigns can be more precise and individualized, and can be according to where one lives, caste, gender, socioeconomic conditions, and identity. This means that to win an election today one needs to create an election campaign that supplements pre-existing political wisdom and tactics with the new age methods like combining digital communication with on-ground communication.

That is by understanding what people are thinking or their perception online and then modifying the messaging on the ground in rallies, in setting up hoardings in strategic locations, and in flyers. It is very important to stand apart in the barrage of political information that will be shot at the people.

This can be achieved by having onboard the best minds from the world of both IT and social sciences. This is where political consultancies come in, where a political consultancy can work on ensuring that your messaging is created and appealing to the masses while also making sure you do not lack behind in-ground or in digital space. LEADTECH is one of the leading political consultancies that provide services and guidance on how to win elections.