Politics in Kerala is dominated by 2 coalition fronts:  the Communist Party of India(Marxist)-led Left Democratic Front (LDF) & the Indian National Congress-led United Democratic Front (UDF) since the late 1970s. The former two coalitions have been alternatively voted to power since 1982.

The political alliances have stabilized strongly in such a manner that, with rare exceptions, most of the coalition partners stick their loyalty to the respective alliances. As a result of this, ever since 1979, the power has been clearly alternating between the two fronts without any exceptions. However, till then the political scenario in Kerala was characterized by continually shifting alliances, party mergers and splits, factionalism within the coalitions and within political parties, and the formation of numerous splinter groups. The political scenario has changed in Kerala and currently, the majority of news events are happening with respect to actions taken by political parties in Kerala. 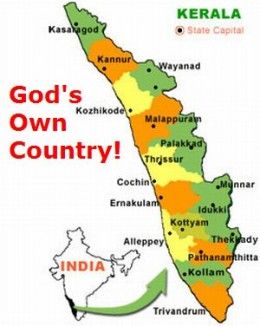 Kathakali this culture and heritage of Kerala is reflected in its various art forms, martial arts, dresses, the people, and cuisine.  Kerala is famous for its cultural art performance. The visitors can enjoy the following art performances in Kerala: –

Mohiniyattam – The dance of a beautiful enchantress.

Kalaripayattu – A martial art form that involves synchronizing the mind and body.

Each of the festivals in Kerala is celebrated with all its pomp and grandeur. The main festivals of Kerala include Onam, Vishu, Eid, Thrissur Pooram, and many more. In some of these festivals like Pooram, the main aspect is the procession, where elephants are decorated and taken out to the temple grounds.

Tapioca is a major food of the Keralites. Besides the production of the main crop, Kerala is also a major producer of spices that form the cash crops of the state. Kerala produces 96% of the country’s national output of pepper. The important spices are cardamom, cinnamon, clove, turmeric, nutmeg, and vanilla.

Kerala is well known for its rich heritage of art and culture. The State is aiming to make culture one of the major driving forces of the economy.

The Communist movement and its eventual emergence to power in 1957 initially held the promise of containing the influence of caste. However, the overthrow of the Communist ministry in 1959, following the ‘liberation struggle’ organized by caste/communal forces, dampened such initiatives. This gradually opened the possibility for communal forces to manipulate the political processes by forming alliances with secular forces.

The above development soon came to have its repercussions in the cultural sphere as well. As the noted historian K. N. Panikkar says, parties began emphasizing political struggles over cultural struggles. Further, they even began considering cultural politics as secondary to power politics with the result that though Kerala advanced politically, it suffered a serious setback in the cultural front.

Which party is in power: –

Two coalitions – the Communist Party of India (Marxist)-led Left Democratic Front (LDF) and the Indian National Congress-led United Democratic Front (UDF) has alternated in power since the 1980s. There are 20 Lok Sabha constituencies in Kerala. Kerala is the most largely politically aware population, which actively participates in state politics. Since the office has alternated between leaders of the Indian National Congress and of the Communist Party of India (Marxist). The latter party’s Pinarayi Vijayan is the current chief minister; his Left Democratic Front government has been in office since 25 May 2016.

What were the main issues faced by people of Kerala?

Due to increase in population rapid urbanization, industrialization and consumerism also increased which led to pollution of air, water and land.

Destruction of rivers ecology in Kerala is mainly because of indiscriminate and uncontrolled sand mining.

30% of the total population lives in coastal areas. 2300 industries are discharging effluent directly into marine and freshwater bodies and development like ports, harbours and sand mining etc led to coastal erosion.

High population density, opened for cultivation and artificial fire etc has resulted in forest destruction. A number of forest animals disappeared and altogether wild animals have largely been affected.

Not enough jobs to meet the expectations of educated people. On the other hand, Kerala faces a shortage of manual labour.

But the major problem is the mentality of the people, everybody there wants a white-collar job and doesn’t want to sweat a day and the state government doesn’t have enough adequate industries to provide the same.

Promises made by the party in power: –

Creation of 2.5 million jobs tops the list of promises made by the government. It promised to give a government which is secular, corruption-free, hunger-free and nature friendly government.

Another promise made by the party was the construction of a new dam in Mullaperiyar, promoting 1,000 schools to international standards, financing 1,000 start-ups and stabilization of the price of essential commodities over the next five years, said Vaswani.

The government also promised to provide home, toilets and power supply to all and to increase welfare pension to ₹1000 and also to provide the citizens with health insurance schemes.

However, jobs were created but it was because of the growth of the IT industry and the government had nothing to do with it, the main reason why people does not take government seriously. And also there was no mentioning of the liquor ban in the state.

Current issues in front of the state government of Kerala: –

The economy of Kerala: –

Kerala accounts for 2.8% of India’s population, but its economy contributes nearly 4% to the Indian economy. Thus, the southern state’s per capita income is 60% higher than India’s average.

Kerala is one of the few states to have marketed its natural beauty successfully to the leisure tourism sector. The state’s unique heritage and cultural diversity have helped attract tourists from the world over. BBC Travel survey has rated Kerala as the top favourite tourist destination among foreign travellers.

Kerala can be termed as the land of spices, considering the large variety of spices grown in the state. Kerala is the largest producer of pepper in India and accounts for a lion’s share in India’s production. Apart from pepper, other spices produced in the state include ginger, cardamom, nutmeg, tamarind, etc. During 2019-20 (till December 19), spices export from the state stood at US$ 315.57 million.

Comparison between the impact of social media and print media: –

Social media has immensely changed the way public figures, particularly politicians, are viewed in the public sphere. Never before have politicians been so personable and relatable to their constituents. Social networking sites update in real-time and are accessible on a wide range of platforms and devices. By using social media to their advantage, politicians are able to share their views on policies, engage in conversation with voters and shape public opinion about their campaign.

Social media users in Kerala are likely to influence the results of at least 71percent ‘high-impact’. 140 Assembly constituencies went to polls on the election, a report of the Internet & Mobile Association of India has revealed.

There are four ‘medium-impact’ and 65 per cent ‘low-impact’ constituencies. The remainder, classified as ‘high-impact’, could determine the eventual winner in the State, said the report titled Social Media Impact on the Kerala Elections 2016. The Election Commission’s engagement on digital media is extremely progressive and very relevant in the context of Kerala.

This engagement is only likely to increase, going forward. Changing trends Voter activity on social media will further create pressure for political parties to engage more with them, the report says. Both the Election Commission and political parties could use social media to get the young, large incidence of ‘sharing’ makes it particularly important for parties to develop honest and favourable content.

The media has been referred to as “The Fourth Estate” with the important function of being the news media – “the press” – and serving as the eyes and ears of the public. The traditional print media reporting has been viewed over time as the way to ensure the state public gets the real scoop on the functioning of government and viewpoints of a political candidate.

The news media is a societal or political force or institution whose influence is not consistently or officially recognized. Free media plays an important role in influencing political discourse during elections.

When free and balanced, traditional media (print and broadcast) foster transparency and determination of important electoral information. Then the rise of media provides further opportunities for participatory citizenship. Kerala is the classic Indian case of politicization spreading to a large section of the population and creating a newspaper–reading culture. Many forces influenced this process. They include, most importantly, working peoples struggle the social movement of the oppressed caste, and left politics.

The connection between masses forming the habit of reading newspaper and the existence of an authentic public opinion is noted. Thus, by the media owing to the prevalent levels of literacy, dissemination of information by means of the written word goes much deeper in Kerala than elsewhere in India; this has important implication for the quality, depth of public opinion and participatory democracy in the state.

The implication is important for the rest of India: – the formation of an authentic public opinion will not be possible in the absence of a newspaper –reading culture – the mass habit, in town and country, of reading daily and periodical newspapers and tracking major happening through them.